This week, we begin a regular feature on this blog: Meet Our Market Vendors. We hope this encourages you to chat with the farmers and vendors and learn a little more about the Market community. Jug Bay Market Garden's Scott Hertzberg is an interesting guy...one of those people you want to hang out and chat with. He's passionate about local farming and sustaining the traditions of farming in a way that benefits both farmers and customers. In fact, he's so interesting to listen to that, when a group of us first met about the market this winter, Scott had a room of about 20 hanging on his words. As I wandered the market this weekend, I stopped by the Jug Bay tent several times (and it was packed most of the time!) and was impressed with the way Scott really interacts with his customers -- it was wonderful to overhear snippets of conversation with many, many people. In the few minutes I could get with Scott when he wasn't working with a customer (but he was arranging produce and gorgeous flowers) I asked Scott a few questions:

How long have you been farming? Seven years.

What did you do before you became a farmer? I was a librarian. In fact, I still work as a librarian two days a week. I really need about 90 hours in every week.

So now you know. Scott Herzberg: Farmer and librarian. That is so cool. Stop by and say hi (and buy some of those lovely flowers) at the next Market, June 7. In the meantime, keep visiting the website and this blog -- we continue to add and update all the time.
Posted by pricklygirl at 8:08 AM No comments:

Email ThisBlogThis!Share to TwitterShare to FacebookShare to Pinterest
Labels: Meet the vendors

Did you get any of these tortillas? Delicious! So delicious, in fact, that a dozen barely made it home...and didn't last through the afternoon.

There were other varieties, but I went with plain old flour. Next time, I'll try some other types...and remember to buy a few bags of these!
I'm sure that these tortillas would be great with other things (like vegetables, meat, fish, salsa, beans, etc.) but they're fantastic on their own. In fact, they reminded me of my mom's Norwegian lefse. And anytime you can buy homemade food outside on a beautiful spring day, and get a really strong flavor memory...well, that's a good day.
What about you? Favorite food of opening weekend?
Posted by pricklygirl at 7:56 AM 1 comment: Thanks to everyone who came out for our opening weekend -- we hope you're enjoying your fresh oysters, strawberries, sausages, eggs, bread, lettuce and sugar snap peas, as well as those lovely flowers, soaps, ceramics, alpaca yarns, chocolates...the list goes on and on. Special thanks to all our volunteers, musicians and vendors -- this market simply wouldn't exist without all of you.
We'll continue to add new vendors, recipes and more to our website before the next market (June 7). And we'll keep updating the blog with ideas on local food, inside information on the market and its progress, and more. Also, if you have any recipes or any other market-related information you'd like to share, please contact us -- we're always on the lookout for fresh ideas!
Finally, there are new photos from Saturday on our flickr page...we'd love to see your photos from the market, too. Please join the flickr group and share your memories of the first day of the season.
See you at the next market, Saturday, June 7, at the Cheverly Community Center!
Posted by Cheverly Community Market at 1:09 PM 2 comments:

Email ThisBlogThis!Share to TwitterShare to FacebookShare to Pinterest
Labels: photos

What's in store at the Market this Saturday?


In addition to locally grown head lettuce, greens, shell and snap peas, broccoli, onions, radishes, strawberries and plants (tomato, basil and eggplant), flowers and eggs, here's a preview of some of the other wonderful vendors and items we can expect this week:
The Cheverly Community Market season opens in just four days!
Posted by Cheverly Community Market at 7:23 AM 2 comments:

Email ThisBlogThis!Share to TwitterShare to FacebookShare to Pinterest
Labels: vendors

Opening week is here (at last!)

If you've driven through Cheverly in the past day or so, you've probably noticed that the Cheverly Market sign has been posted on Cheverly Avenue. This can mean only one thing: Market week has arrived.

Lots of exciting things are planned for Saturday, including music by Cheverly Hot Noodle Concern and Soul Revolver members Kelly & Charles, cooking tips from award-winning chef/educator Scott Eichinger, and many fantastic vendors selling the best in fresh, local produce, dairy, cheeses, baked goods, oysters meats, eggs, flour and more. And gorgeous crafts, too! For a complete listing of our vendors and artists, visit the vendor page on our website. We'll be adding more throughout the market season, so visit often.
This week, we start something new on our website: A featured recipe using ingredients available from vendors that week at the Cheverly Community Market. This week's recipe comes to us from Scott: Asparagus and Brioche Strata. You can download the recipe or visit the recipe page on our website for other great ideas about making the most of your purchases.
Posted by Cheverly Community Market at 2:09 PM No comments:

Last summer, when I set out to find vendors willing to come to our market, I visited nearly every farmers’ market in the region over a one month period. I very soon found out some three unfortunate truths. 1. Almost every farm attending markets was at their limit. Those who were attending markets, especially Saturday markets, were tapped out. Attending a market meant two days of work. One day to pack up the truck; another day to drive to market, sell, and pack-up and go home. Leaving only five days to work on the farm – or four days if they were lucky enough to take one day of rest. Many were attending two markets, leaving even less time to do the work that is so important to us, growing food. 2. There are fewer farms in Prince Georges County than any other county in the Maryland. One of my main resources was the So. Maryland. So Good Farm Guide put out by the Southern Maryland Agriculture Development Commission. The 2007-2008 edition lists 28 “farms” in Prince Georges’ County, twelve of which grow vegetables and fruit. I called all of them, three times. Maybe more. Plus e-mails. I tried to generate interest in a Prince George’s only market, but many would prefer to continue to sell at their established markets in Montgomery County and Fairfax on Saturday as opposed to take a risk on a new market in their own county. 3. The Maryland Department of Agriculture has almost no resources to help new markets get established. According to the Maryland Deputy Secretary of Agriculture, having “Staff and financial resources to operate the markets have been gone for a long time.” So if you are inclined to think, “It’s easy to start a Farmer’s Market. You find Farmers, and they come,” I encourage you to think again. It’s harder to find a farmer than you think. Instead, think of all of your friends, neighbors, and relatives, how of them are farmers? Therein lays the problem.
Posted by Cheverly Community Market at 10:31 AM No comments:

All Markets take place 8am to noon (including Thanksgiving and Holiday events).

The Vendor/Community Group application will be published soon!

We love our animal friends, but please NO pets!

Get directions, information about vendors, groups, musicians, volunteering, and all the nitty gritty on our website.

We are thrilled to be named #1 in Maryland and #16 in the United States -- thank you for ll your support! 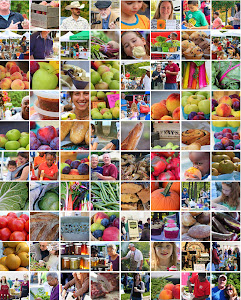 We are grateful to everyone who helps to make Cheverly Community Market possible. See the very long list on our website, and review current volunteer opportunities! 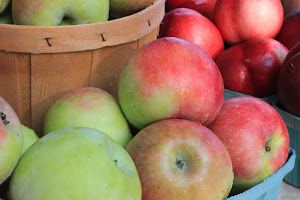 Every day, we're adding great recipes that use fresh ingredients available at Cheverly Community Market, techniques for getting the very best from your food, and more -- click on the photo and come visit us!

Our Mission. Our Values.

The Cheverly Community Market is commited to offering a vibrant market that strengthens the community through providing fresh, nutritious food from local sources, and encouraging unique local businesses and arts. We create an atmosphere that fosters community, inclusivity, and educational activities, while encouraging local economy.

"At the risk of sounding repetitive, I'll say it again....Cheverly is such a warm welcoming community. I have more fun there than at any other market I sell at. I am so thankful that you invited me to come!"
-- submitted by a Market vendor

"Our community market is as much "community" as it is "market". After purchasing beautiful, healthy, local produce, friends sit together enjoying coffee, pastry, and music with the kids happy and safe at the adjacent playground. The vendors are all local and are clearly proud of their wares, happy to answer questions about their farm or give suggestions of how to cook kohlrabi."
-- submitted by a Market regular

We welcome for your feedback!

Have a great tale to tell from the Market? We'd love to hear from you!